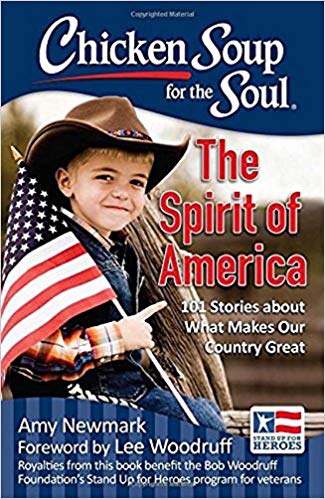 “And Justice for All”

*As seen in Chicken Soup for the Soul: The Spirit of America*

“Let gratitude be the pillow upon which you kneel to say your nightly prayer. And let  faith
be the bridge you build to overcome evil and welcome good.”

The sound of the helicopters reverberated against the mountains, filling the canyon with a deafening noise. It was almost one in the morning, but the normally quiet streets were bustling. I was standing outside my house, tears streaming down my face. I had been crying for hours, but it felt like a minute; I had no concept of time. Earlier that night, I had returned home from work to find my mother lifeless. She had been killed during a heated argument with a family member and her killer had fled, leaving me to find the grisly scene.
In those excruciating hours, friends and family arrived and filled our suburban street. I cannot recall everyone who showed up; their faces meld together in my mind like a collage of love. All I know is that I eventually made my way to a neighbor’s home; the owners were longtime friends of my mother’s, and they had graciously opened their doors to the circus outside.

I sat on their couch, being comforted and awkwardly hugged by people coming in
and out. They said all the right things, but their words sounded empty and my heart ached
too much to believe them. Eventually, a man I had never seen before entered the room
and sat down with the crowd that had gathered.

“Hi Amy. My name is Detective Michael Valento,” he began. “I’m here to bring
you and your mother justice.”

Justice. It sounded like such a familiar concept, one I had been brought up to believe was around every corner in America. Our country was built on justice and fairness… but nothing about that night seemed just or fair to me. Despite fully knowing its meaning, in that moment I couldn’t fathom ever feeling that justice had been served. My mother could not be brought back to life.

“Th-thank you,” I replied. I didn’t know what else to say.

A few months later, Detective Valento was a regular part of my life. Our phone calls became an almost weekly occurrence. Each time we spoke Mike vowed that he would do everything in his power to ensure my mother’s killer would be sent to prison as expeditiously and as permanently as possible. I believed him at the time, but as the months wore on, and the number of hearings grew, I lost hope.

Despite my emotional struggle, I grew to know and care for Mike. He was a kind, gentle man with a heart of gold. His intentions were of the purest, and he symbolized the hope I once had. He was a wonderful advocate. He continued to call me often, checking in to see if I was okay, asking how my wedding plans were going, updating me on everything that was happening.

One particularly hard day, nearly four years after my mother’s death, I came close to losing it. I had been in court all day and I was mentally, as well as physically, drained. Mike had been in court with my fiancé and me, sitting by our sides the entire time. I turned to him and pleaded, “When will this end? Why is he being protected? Why hasn’t he been convicted? Life needs to go on.”

Mike thought carefully for a moment. He looked at me kindly and said, “I know it
doesn’t seem like it, but this is all for you and for your mother. You have to understand
that our legal system, although at times seemingly imperfect, is protecting you. If we
didn’t cover all of our bases right now he could appeal and possibly be free one day. So,
for now, we must be patient. I know it’s hard, but in America good things come to those
who wait.”

Again, my heart was so heavy I couldn’t quite grasp his words, but this time I accepted the situation. I waited patiently for another year. Five years and two days after my mother’s murder, a judgment was delivered. My
brother was given a sentence of fifteen years to life.

I was as relieved as I could be. Justice had finally been served and I could begin to repair my own life, which had been shattered that horrific night. I remember as we fled the courtroom for one final time, Mike had leaned in for an embrace. After our hug he pulled back and said, “See. I told you all would be right in the end.”

At that moment my heart filled with warmth that it had not felt for a while, warmth ignited by someone who had been a complete stranger a few years ago. This man, despite knowing nothing of the content of my character, dedicated a large portion of his life to fight so I could regain control of mine.

Mike’s actions showed me the camaraderie and strength America instills in its citizens. His upstanding dedication to his country and position of service helped change my life for the better. Detective Mike Valento of the Los Angeles County Sheriff’s Department exemplifies everything that is right in our country and with our police force.

And although there is no reason left to carry on a relationship with him, my adoration, respect,
and gratitude for him will never diminish. For, it’s men and women like Mike who gave
me my strength, hope, and life back, and I can never be thankful enough.

An Open Letter to my Deceased Mother